Soybean [Glycine max (L.) Merrill] is one of the major crops widely cultivated around the world, with high levels of protein and oil in seed, so it is highly useful as a feed for livestock as well as a food source for human. In addition, Global warming appears in abnormal weather forms such as weather changes and is expected to continue. Due to abnormal weather conditions caused by climate change, natural disasters and damages are gradually increasing around the world. According to the IPCC (Intergovernmental Panel on Climate Change) Climate Change Report, the global average surface temperature increased by about 0.85°C from 1880 to 2012, and the average surface temperature is projected to rise about 3.7°C by the end of this century, under RCP 8.5 scenario. From 1912 to 2017, the average annual temperature in Korea was 13.2°C, and the average annual temperature change was 0.18°C per every 10 years (NIMS, 2018). Korean peninsula has experienced warming about twice as fast as the average rate of global warming and is expected to experience continued warming in the future (Korea Meteorological Administration, 2015). Temperature is one of the important environmental factors affecting growth, development and seed yield of soybean (Norman, 1979). An increase in temperature decreased the seed size of soybean by decreasing the cell number and seed growth rate (Tacarindua et al., 2012). Also, elevated temperature significantly reduced the pod number and seed number associated with the reduction in dry matter production total dry matter, seed yield and harvest index were consistently reduced by increased temperature (Tacarindua et al., 2013).

In soybean, it is well known that abortion of flowers and young pods is one of the important factors, reducing seed yield due to low pod setting ratio (20% to 60%) (Yoshida et al., 1983). Soybean has very low pod set ratio, and which differs depending on the photosynthesis rate during the pod setting period and is closely related to the seed yield (Ferris et al., 1998). Thus, it is important to have a stable pod number under high temperature conditions, which is determined by the number of abscised flowers and pods during the early stages of reproductive stages, from beginning bloom (R1) to beginning seed (R5) (Puteh et al., 2013). The pod set ratio is high at the daily average temperature of 25°C (Lawn & Hume, 1985) and high temperature above 30°C causes a decrease in pod numbers (Gibson & Mullen, 1996). In addition, reduction in soil moisture content caused by high temperature will increase fertility rates and decrease the pod number, resulting in reduced seed weight and seed size (Thomas et al., 2010). In addition, high temperature at night stimulates flower opening and pod setting in the secondary and tertiary racemes, and the increases in the number of flowers and pods result in a decrease in seed yield by reducing the seed number (Zheng et al., 2002). Meanwhile, temperature fluctuations during seed filling seriously reduce yield in legumes (Rainey & Griffiths, 2005) due to poor seed development (Hall, 2004). High temperature reduces the time for seed to fully develop before maturity, reducing the seed size (Duthion & Pigeaire, 1991). Also, high temperature during maturity period reduces the amount of photosynthesis, reducing seed yield, germination and vitality of seeds (Ashely & Boerma, 1989; Egli et al., 2005).

Soybean has long reproductive stages and high temperature stress during this period negatively affects seed yield and yield components in soybean (Egli et al., 2005). Seed yield components are affected slightly by 30°C and severely affected by high temperature above 35°C (Puteh et al., 2013). Many studies have shown the effects of high temperature on the production of soybean. seed yield was reduced due to reduction of yield components such as fertile pods, seed number and seed weight. The number of seeds per pod was reduced by the failure of seed set because of the unfertilized ovules and the abortion of fertilized ovules high temperature stress during flowering (Tischner et al., 2003). In addition, Seed number and seed size are two main factors related to seed yield, and seed number is determined by the pod number and seed number per pod (Woodworth, 2013). The maximum seed size is genetically determined, but the actual size depends on the number of seeds and environmental factors during the seed filling period (Sadras & Egli, 2008). An increase in mean temperature from 25 to 30°C during R1-R5 reduced the single seed weight (Zheng et al., 2002). Similar study performed by Gibson & Mullen (1996) also showed that increase in mean temperature from 30.5 to 32.5°C after flowering reduced single seed weight.

The component analysis was performed to analyze the changes in nitrogen (N) of seed for soybean cultivar under high temperature conditions. The samples were prepared by grinding to a fine powder, three replicates from each cultivar and temperature treatment. The ground seed samples of 0.2 g were used to determine nitrogen content in soybean seeds. Analysis was carried out by Elementary analyzer (Vario MAX cube, Semany), based on the Dumas combustion reaction (Jung et al., 2003).

Statistical analysis was conducted using R packages (version 3.4.3). To evaluate the effect of elevated temperature on growth characteristics and yield components, analysis of variance (ANOVA) was performed and Duncan’s multiple range test for significant differences between treatments were conducted, when the P-value is significant at 5% significance level. A correlation analysis was carried out to evaluate relationship of seed yield and yield components, and to determine the contribution of each component to yield. 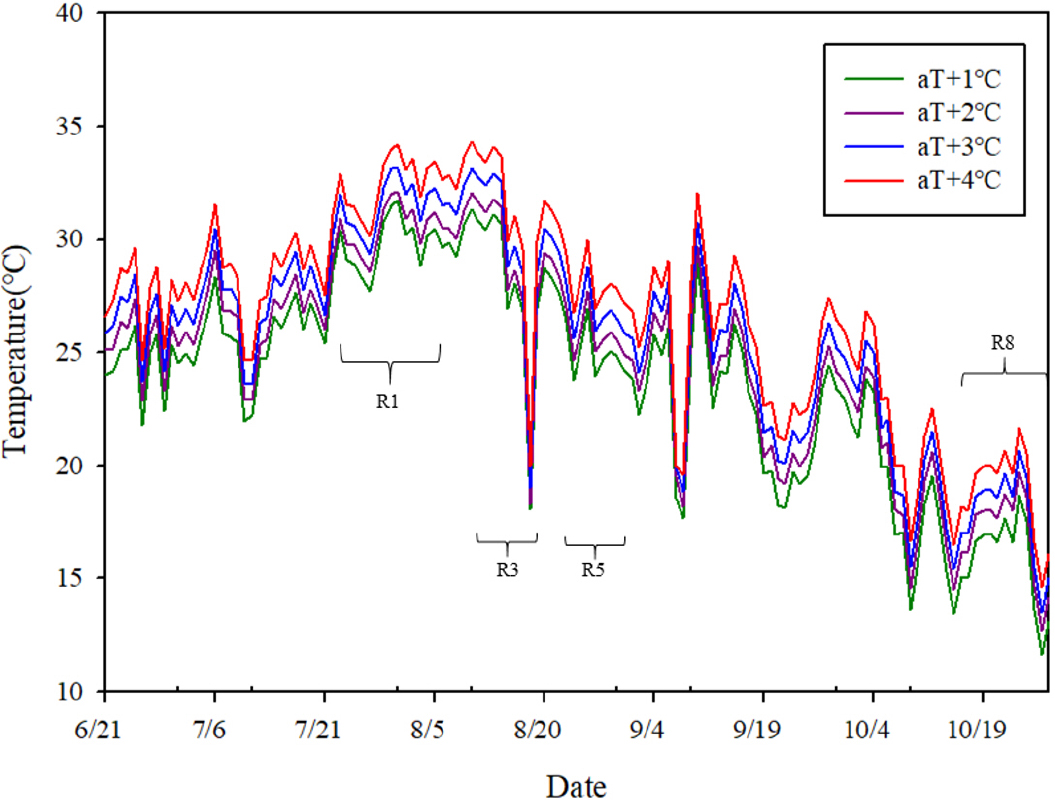 Mean temperature between phenophases according to cultivar and temperature.

ybased on the dry matter of seed.

Also, Table 4 shows the seed yield and yield components of two soybean cultivars under elevated temperature. Pod number per plant, seed number per plant, seed number per pod and single seed weight showed a significant difference between cultivar and temperature and the interaction effect between cultivar and temperature treatment was also recognized. Daepung-2 and Daechan did not show statistically significant difference up to aT+3°C and aT+2°C in the number of seeds, respectively, but showed a sharp decrease under aT+4°C condition. Pod number and seed number per plant showed high positive correlation (r=0.862***) (Table 3), and thus showed similar decreasing tendency with temperature rise. The pod number and seed number were the lowest in the condition of aT+4°C in Daepung-2, while Daechan was the lowest in the condition of aT+3°C. Meanwhile, seed number per pod and seed weight showed similar response for each cultivar. The number of seeds per pod increased with temperature rise, reducing single seed weight in both cultivars. Daepung-2 had the lowest seed yield at aT+4°C due to a decrease in the single seed weight. Also, Daechan had the lowest pod and seed number at aT+3°C, showing the lowest yield at aT+3°C. However, because these results might be affected by various factors, such as sampling error, annual repeated experiments are required. The reduction of seed yield in Daechan (41.4%) was higher than the Daepung-2 (36.1%). In addition, Daechan showed a decrease in nitrogen content under high temperature conditions, while Daepung-2 showed an increase (Fig. 2). According to Huang & Xu (2000), high-temperature stress during the soybean growth period inhibited nutrient absorption, which greatly affected the content of essential elements such as N and P. In particularly, it was known that nitrogen content was greatly reduced by high temperature stress (Thomas et al., 2003), which was believed to have reduced nitrogen content in the plant and roots due to reduced nitrogen fixation (Hungria & Vargas, 2000). These results suggest that the large-seed cultivar such as Daechan seem to be more affected by high temperature in seed yield than medium-seed cultivar such as Daepung-2. However, further research is required to evaluate the response of each process that involved seed yield production under high temperature. 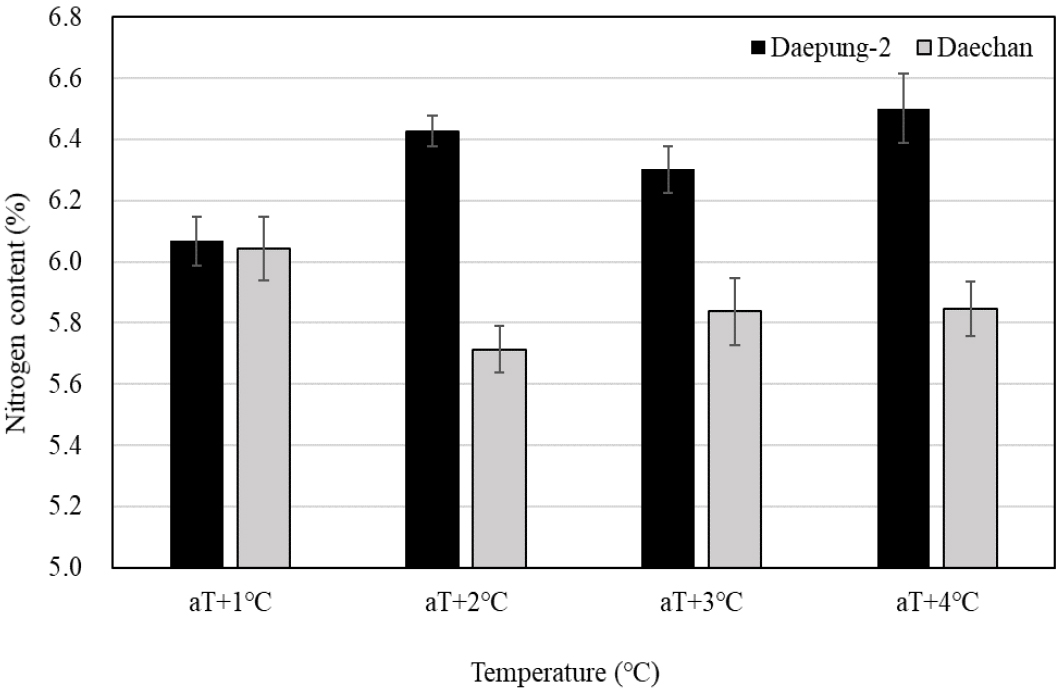 Seed size was determined by the seed growth rate and the duration of maturity (Egli, 2004) and was known to decrease with the rise of temperature (Thomas et al., 2010). Fig. 3 shows the seed size distribution of two soybean cultivars under increased temperature. Daepung-2 showed a decrease in single seed weight by 31% (Table 4), increasing the small seed ratio under aT+4°C (Fig. 3). The ratio of seed size to less than 4mm increased in Daepung-2. In case of Daechan, seed growth rate increased and the maturity period was shortened, reducing seed weight by 25.5%. The ratio of seed size of 4-4.75mm and 4.75-5.6mm increased. 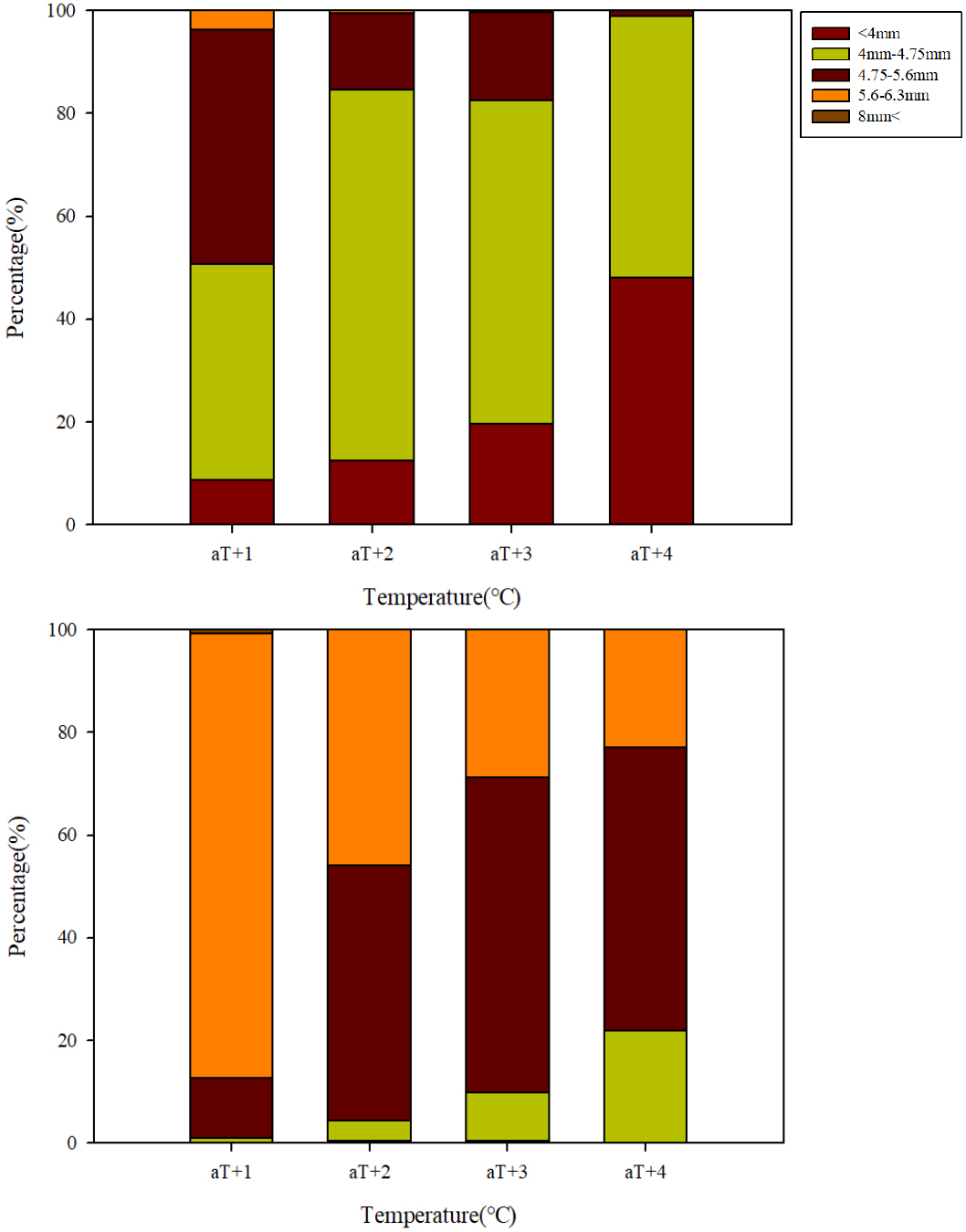 This work was supported by the National Institute of Crop Science (NICS) of Rural Development Administration (RDA), Republic of Korea (Project ID: PJ01414302).

Go to ContentsGo to Main NevigationGo to Footer